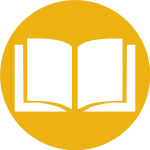 The Granger Public Library's mission is to provide cultural enrichment and leisure activities for all ages.

The library provides wonderful programs for community participation including an adult book club, a story time for children ages five and younger, and an after-school program for children in grades kindergarten through 5th. 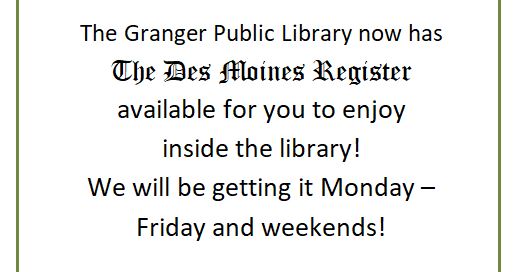 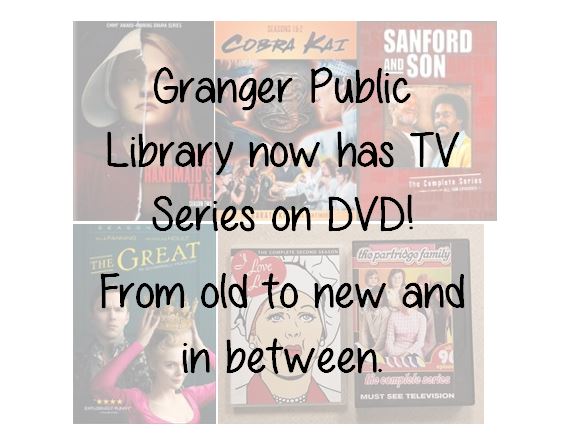 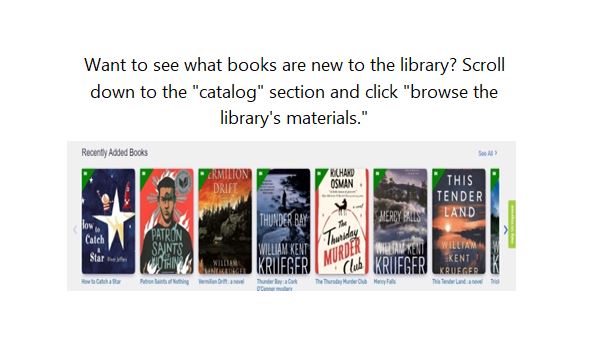 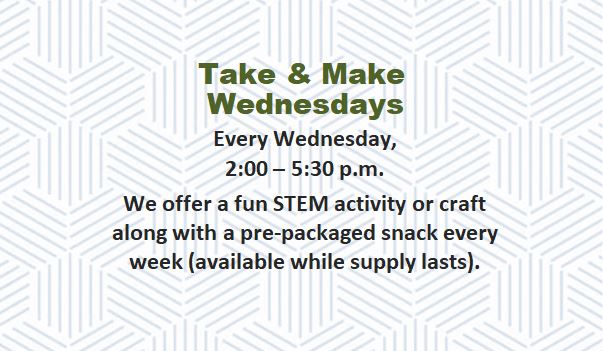 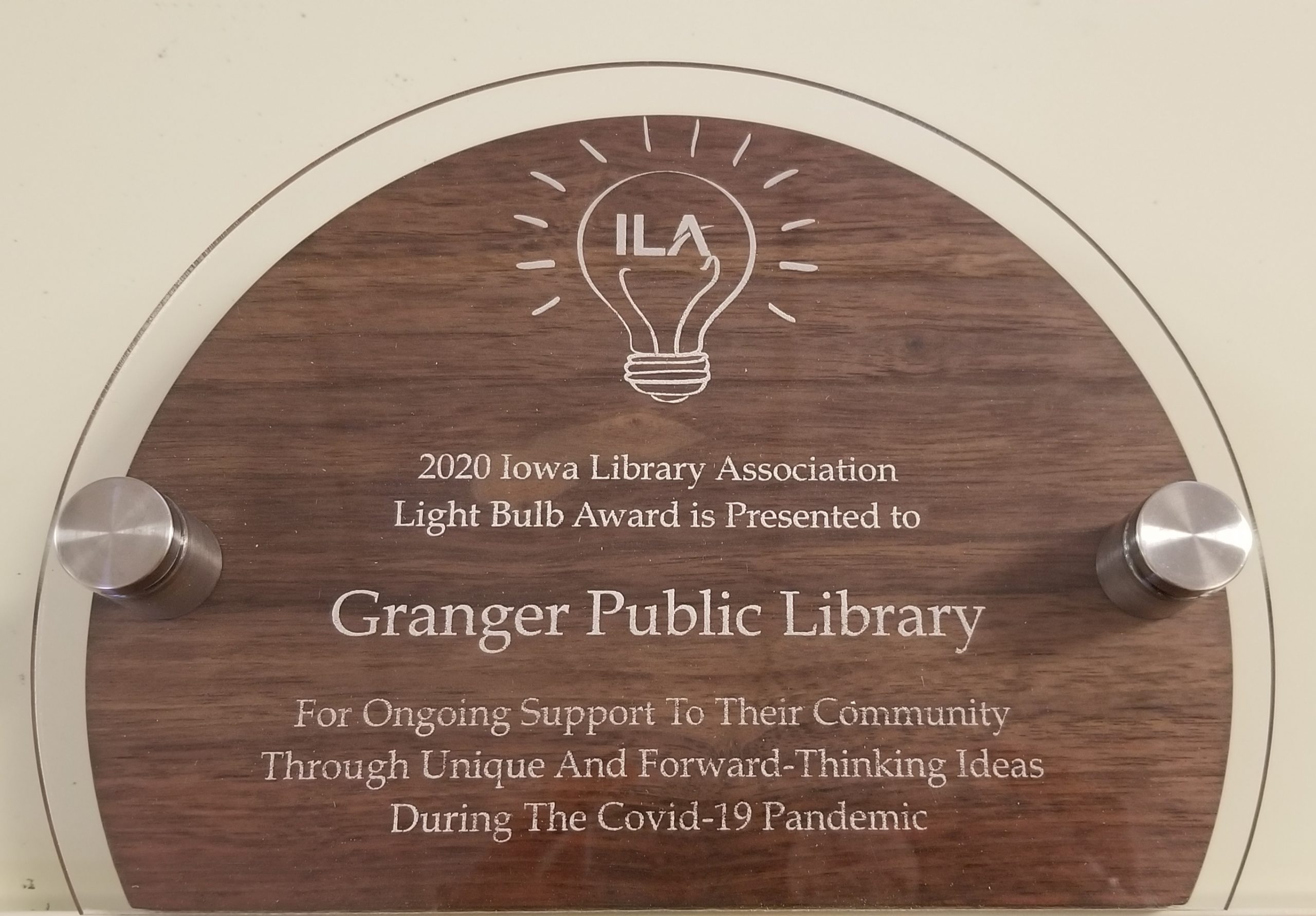 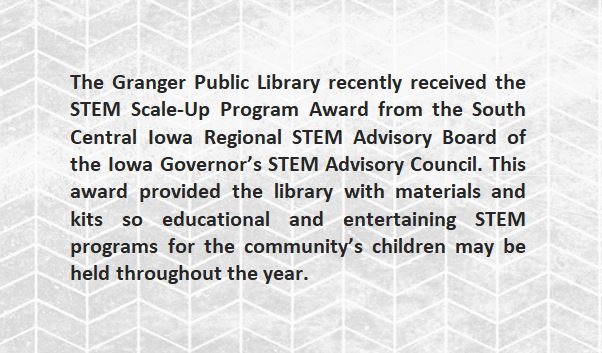 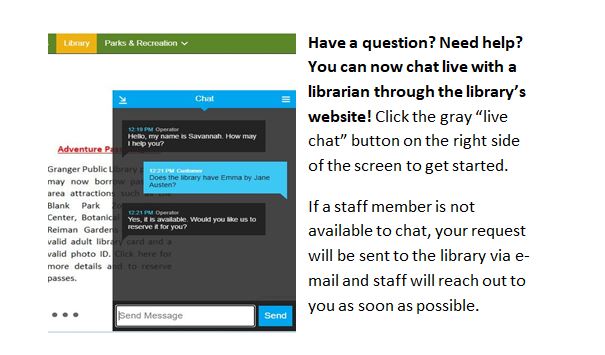 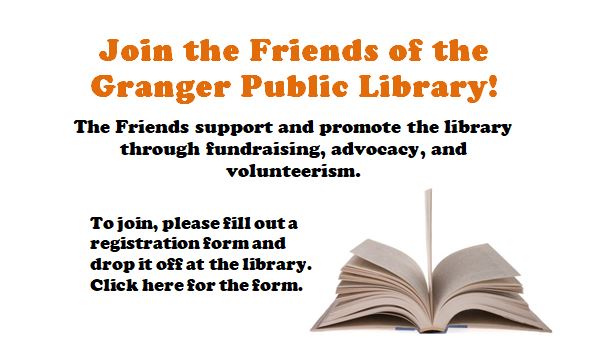 We are closed on Friday & Sunday

Borrow audiobooks, e-books, and e-magazines from the Granger Public Library and download them instantly to your device!

Click here, select Granger Public Library as your library, use your library card number to log-in (be sure to add a zero to the beginning; all card numbers must be five digits long), then choose the materials you'd like to check out.

What's New at the Library

There are no upcoming events.

The following polices guide the operation and services provided by the Granger Public Library:

Patrons may borrow free passes to area attractions by using a valid adult library card and a valid photo ID. Any adult library patron may borrow a pass to enjoy an educational day of family fun! Click here for more info and to reserve passes.

Library Programming Expand
Story Time is every Wednesday from 9:45 am to 10:15 am for kids 0 to 5 years of age. We have puppets, flannel board stories, songs, a parachute, musical instruments, snacks, and crafts. Come join the fun!
After-School Program is held every Wednesday from 2:30 pm to 3:30 pm for kids in grades K through 5. A one-time registration is required. The program varies each week. Previous programs have included STEM activities, Snap Circuits, LEGOs, bingo, and crafts as well as visits from the ISU Insect Zoo and Blank Park Zoo to name just a few! Kids may come to all the programs or just to ones that interest them.
Crochet & Knit is every Tuesday from 9:30 am to 11:30 am. Hooks, needles, and lessons are provided for first-timers. Just bring your own yarn and join the group!
Book Club meets every third Monday at 6:30 p.m. It is facilitated by the members. If you are interested in joining or would like to start another book club, please contact Harriet Peterson at 515-999-2088.
Patron Computers, Copying & Printing Expand

The library provides two computers for the use of the public during normal library hours. We also provide free Wi-Fi. We ask that all public who use the library computers carry a library card. One may be obtained at any time for people in or out of the area.

The library provides both printing and copying services. A required fee is to be given for every copy or print: $0.10 for black and white copies and prints, and $0.50 for color copies and prints. We do not provide special paper. If you would like your prints to come out on anything other than the provided white 8.5 x 11 paper, you must supply it.

Want to borrow an item from another library? Just let us know by stopping in or calling!

Our friendly staff is here to assist you in finding the right book, CD, DVD, or online resource.

History of the Library

The Granger Public Library was started in the 1920s by the Kozy Club which is now known as the Granger Women’s Club. The library was originally housed in the town hall, stocked through book donations, operated by Kozy Club members, and supported through bake sales!

In 1942, at the request of the Club, the town council voted to take over the library. The mayor appointed a library board of four members.

The library was originally located in an unused room in the Granger Public School. It was open three afternoons each week, and was available for the use of the school and the public. The first appointed Librarian, Catherine Knox, was paid a salary of twenty-five cents an hour!  On July 24, 1967, the library was moved to the Masonic Building because the school was in need of the space. When the city built the new city hall in 1982, room was provided for the Granger Public Library.  On July 10, 1982, the library moved from the Masonic Building into city hall.

Interested in more history?  Check out the Iowa Historical Society.

The purpose of the Granger Public Library is to provide all individuals in the community with carefully selected books and other materials to aid the individual in the pursuit of education, information, research, pleasure, and the creative use of leisure time. Because of the volume of publishing, as well as the limitation of budget and space, the library must have a selection policy with which to meet community interests and needs.

It is the right and responsibility of the parent or legal guardian to monitor their child’s reading activity. Selection of materials for the library collection is not restricted by the possibility that minors may obtain materials their parents consider inappropriate. Library staff and Board upholds the confidentiality of all patrons’ circulation records. The library endorses the Library Bill of Rights and the Freedom to Read Statement adopted by the American Library Association.

The responsibility for material selection and the development of the library collection rests with the Director, with input from library staff. Suggestions from patrons are welcomed and given consideration within the general criteria for selection. The final decision for purchase rests with the library.

The main points considered in the selection of materials are: individual merit of each item, popular appeal/demand, suitability of material for the patrons, existing library holdings, budget, and space limitations.

The library may accept donations, but the Director will decide by means of criteria whether to add the gift to the collection.

An up-to-date and attractive collection is maintained through a continual withdrawal and replacement process. Replacement is dependent upon current demand usefulness, more recent acquisitions, and availability of newer editions. Ongoing weeding is the responsibility of the Director and is authorized by the Board. Withdrawn materials will be handled in a similar manner as donated materials.

Materials are carefully selected but there can arise differences of opinion regarding suitable materials. Patrons requesting that materials be withdrawn from or restricted within the collection may complete a “Statement of Concern About Library Resources” form, which is available in the library. The inquiry will be placed on the agenda of the next regular meeting of the Board.

(Revised/Approved by the Granger Public Library Board 04/15)

Friends of the Library

3. Monitor and evaluate the overall effectiveness of the library. The community puts its trust in the library board to make sure the library is operating the way it should. For example, the library boards is familiar with the library’s budget – where the money is coming from and how it will be spent. The board monitors monthly financial reports and approves the bills so they can be paid. The board also helps determine whether the community is satisfied with the service received from the library.

4. Set library policies. The library boards spends much of its time on policy issues – developing policies and monitoring the effectiveness of those policies. (Policy is a carefully designed, broadly stated, written guideline for actions and decision of the library.) Once adopted by the board, library staff carries out the policies on a day to day basis.